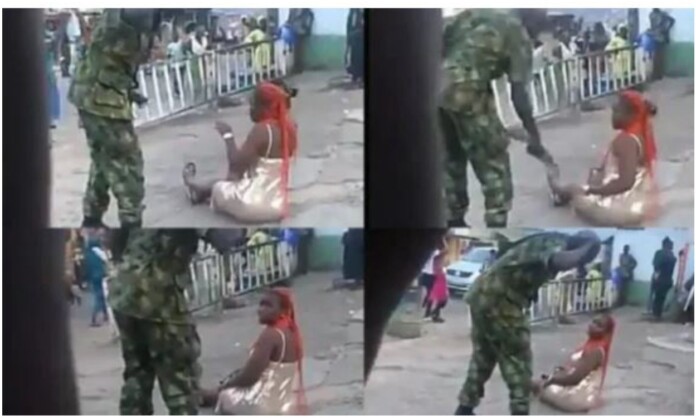 A video of a Nigerian soldier beating mercilessly a yet to be identified lady for indecent dressing has become a growing sensation on social media.

In the video, Kemi Filani News gathered a yet to be identified soldier was caught on camera hitting a woman sitting on a dusty road, beating her back, buttocks and other parts of the body.

In yet another video; a young man was asked to sit on a dirty floor while the soldiers cut his hair with unsterilised scissors.

Kemi Filani gathered that the soldiers were attached to Operation Burst were seen beating and extorting both men and women over inappropriate dressing in Beere and other parts of Ibadan.

The video, however, has sparked outrage over the gross human rights abuse perpetrated by the uniformed men.

According to some of the victims, the soldiers said hairstyles like afro, punk, dreadlocks are all forms of indecent dressing, so anyone with such hairstyle was dehumanized in front of the people who could only look like a toothless dog.