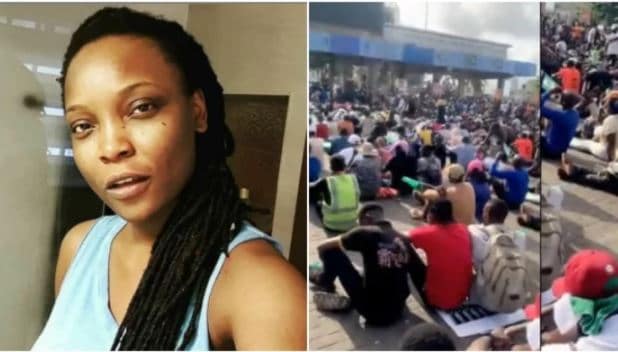 A popular disc jockey, Obianuju Udeh, popularly known as DJ Switch has been asked to apologize to the Nigerian government or face The International Criminal Court (ICC) over misleading reports on the #EndSARS protests in Lekki toll gate on Tuesday, 20th October 2020.

International Human Rights Protection Forum in Florida, United States, made this known in a statement released where it states that Obianuju’s claims could have triggered genocide and war crimes in Nigeria.

Read the statement in full;

”DJ Switch was alleged to have witnessed and streamed as armed gunmen fired shots at #EndSARS protesters.

However, the disc jockey who according to reports claimed over 70 persons died from the incident backtracked recently, saying at least 15 casualties were recorded.

IHRPF said DJ Switch must apologise to the government and citizens of Nigeria for misleading key decision-makers across the globe.

Failure to do so, the group said it won’t hesitate within the next seven days to drag the disc jockey to ICC, Hague, the Netherlands for peddling fake news capable of throwing the country into a state of anarchy.

According to the human rights group, Obianuju and her likes were sponsored by desperate politicians seeking to illegitimately overthrow the government.

The group, however, called on the United Nations (UN), African Union (AU), United States of America, United Kingdom, China, Canada and other international partners in progress to standing by Nigeria at this difficult moment.”