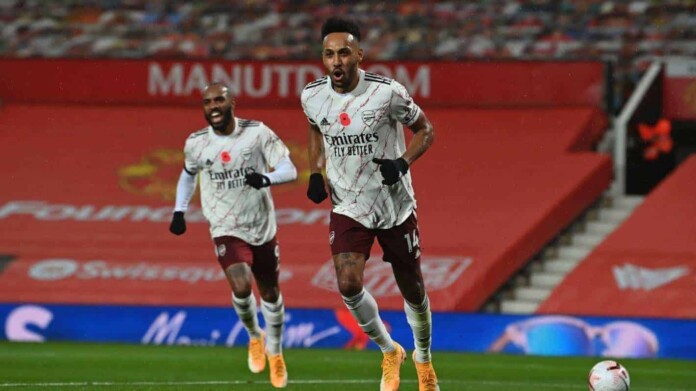 Arsenal beat Manchester United in the Premier League for the first time in 14 years.

Pierre-Emerick Aubameyang’s penalty earned a thoroughly deserved 1-0 win for the Gunners on Sunday.

United’s run without a home win in the league has now stretched to six games, as Ole Gunnar Solskjaer’s men sink to 15th in the table.

Starved of the chance to counter-attack by the visitors’ disciplined set-up, United were far from the threat that thrashed RB Leipzig 5-0 in the Champions League in midweek.

Arsenal have struggled for goals of late, but were gifted the chance to win the game by Paul Pogba’s mis-timed lunge on Hector Bellerin and Aubameyang’s first league goal since the opening day of the season moved Mikel Arteta’s men up to eighth.

Victory also ended a run of 29 games without a win away from home for Arsenal against their ‘big six’ rivals stretching back to January 2015.

The day started in sombre fashion for United as they remembered former great Nobby Stiles, who died at 78 this week, and confirmed the news that another legend of the club Bobby Charlton is suffering from dementia.