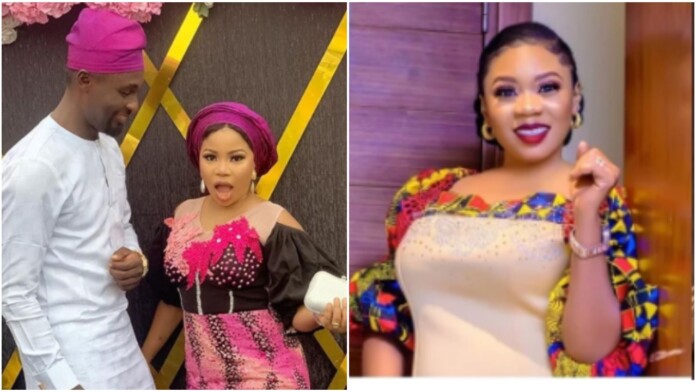 Hours after being mocked by former best friend and colleague, Wumi Toriola for not having a child yet, actress Seyi Edun has now reacted in a mature way, alongside her husband, Adeniyi Johnson.

Rather than tow down the ugly road of exchanging unpleasant words with Wumi Toriola, Seyi Edun rather chose Love and light.

Sharing photos of herself and her husband in their traditional outfits to church today on Instagram, Seyi Edun wrote “Happy Sunday from us ❤️” while Adeniyi Johnson also shared same photos with the caption “LOVE & LIGHT ❤❤❤ ME & MINE ❤❤❤ COKE & FANTA”

Already positive comments and prayers have filled their comment sections.

Kemi Filani News recalls that Wumi Toriola whose son turned one a few weeks ago, called out Seyi Edun on Friday for not celebrating him but having the guts to send him money from Ajo (piggy bank), especially as ex-rival Toyin Abraham deemed it fit to celebrate him.

She went as far as saying she has introduced her, Seyi Edun to Doctors that can help her get pregnant.

“…. i was infertile for 8months, went through procedures, ask Seyi who told her about infertility doctor, pleae stop that pity game, I did IUI 2 times, it didn’t still take the passionate part of me, why extend a fight to kids, yes we have fallen out, but same kid you were rejoicing over his birth, you sent ajo on my son’s birthday, yet you refuse a birthday message as test just because you are pitted, madam stop glorifying infertility, we have ll been there, don’t lt waiting take your passion and compassion” Wumi had written.